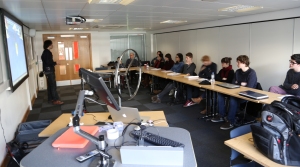 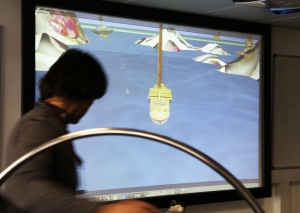 Dr. Ricardo Climent was invited to talk with music students at Lancaster University.
His lectured raised an awareness to the primacy of the ear to question visual dominance. Multi-sensory listening questions the materialism of the ‘acousmatic’ tradition. Can a visual medium reflect a listening experience using multi-sensory navigation through real and virtual environments? How can a sense of place directly affect the way we structure sound typologies? These questions are at the very core of his research into sound and image at the University of Manchester.
Ricardo Climent bio
My research focuses on the articulation of structure and form in music composition and interactive media. The architecture of my musical works often employs mosaic-size sonic materials, which I have exposed across a wide range of outcomes. For example I have been involved in the creation of a number of collaborative projects, such as: The Microbial Ensemble, (sound installation performing microbes, with Dr Quan Gan); The Carxofa Electric Band (a children’s project with vegetables and Electronics with iain McCurdy); The Tornado-Project (a cross-atlantic set of works for flute, clarinet and computer for American wind virtuosi Esther Lamneck (clarinet) and Elizabeth McNutt (flute)); Drosophila Tour (a dance-theatre work of a blind fly with KLEM and Idoia Zabaleta); Hồ- a sonic expedition to Viet nam, (a 3D interactive interface project for planetariums),  project manager for S.LOW Projekt, (a large scale cross-disciplinary project in Berlin) and for LocativeAudio (.org), a project about sound, people and cities using smartphones, in partnership with NoTours, escoitar and Institutions in UK and abroad and timbila.org (started by maestro percussionist Miquel Bernat).In areas of academic service, since 2006 I serve as director of the NOVARS Research Centre, University of Manchester in UK and I previously held a lecturing position at SARC, (Sonic Arts Research Centre, Belfast). I have also served as resident composer and researcher at the JOGV Orchestra in Spain; Conservatorio of Morelia in Mexico, at Sonology – Kunitachi College of Music (Tokyo), the LEA labs, at the Conservatorio of Valencia, the Cushendall Tower – In you we trust – in Northern Ireland, at CARA- Celebrating Arts in rural Areas which is an Irish cross-border initiative, at N.K. Berlin and at the Push Festival in Sweden.In terms of education, prior to completing a PhD in Electroacoustic Music Composition and a Master of Arts in the same area (both at The Queen’s University of Belfast), I obtained a five-year degree in Economics at University of Valencia, Spain and another one by FUFAP, Alcala de Henares. webs:Weblinks –electro-acoustic.com – Projects compilation
sonorities.org
http://sonicpathfinder.com
0.000000 0.000000